Time to turn over the sheriff duties....

This are a real hard post fur my momma to write... in fact, I's not been myself fur so long that Momma found it hard to write at all. As most of y'all know, last year, I dislocated my hip, had problems healing and wound up really gimpy. But I still liked to eat and sleep and my momma and Kinley's momma have been doing their level best to make me as comfortable as possible. But wiff da Arthur Itis in my other hip, dere ain't really no way fur me to be comfy. I's havin' a harder and harder time just walkin' around to do my bidness-- if I stops to poop, I kinda falls ovfur. Dere ain't no dignity in dat. And I don't evfun enjoy da rides in da fancy dog stroller dat Momma got me... I can't gits comfy, I just wants to try to bite on myself (da old allergies are as bad as evfur and da one thang dat helped me-- dermacton from da UK-- was banned by da FDA under Trump when he pushed all dose anti-European imports nonsense). So I's a purdy miserable pup and barely hangin' in der by a thread--- and it are gittin' unraveled.

I's been doin' my best to hang in here cuz I's da sheriff of dis here spread-- keepin' da peace and enforcin' da rules and keepin' evfurryone in line. But I's too tired to do dat anymore. I been tryin' to decide which of my doofus deputies to turn my sheriff's duties ovfur to.... but it ain't been an eazy decishun. One of da candidates-- Kinley-- is real sweet but kinda a fluff brain who tries to chase da kitties too much. Brinley is too busy watchin' tv and barkin' at windshield wipers on da tv screen to take da job with the proper seriousness it deserves.... So whut's a pup to do?

Seems like da decishun has been made fur me... Kinley, Travis, and der Momma is movin' to Lubbock next month so Kinley will have to be sheriff out dere.... or maybe Travis will. He probably has more of da necessary gravitas.

And my spread will be under the snoopervision of Brinley.... Lawd help 'em,  Whut wiff Bowie who literally runs up da walls and flips like he's Donald O'Connor in Singin' in Da Rain (all dat tv watchin' of Brinley's has taught dis ole pup a few thangs, bol, bol) and Brinley's obsession wiff da tv.... well... if Angie wasn't so fond of da nip, she might be da leadin' candidate. I's probably gonna make my trip to da  Land of Infinite Steaks and Bacon next week sumtime.... Brinley will let y'all know. I sure will be glad to see my BFF,Whitley and play sum pool ball wiff her... dat's my vishun of Heaven, anyways, dat and lots of steak and barbeque and road trips ridin' shotgun.

Since dis are my farewell, as I's writin' it, I'm gonna put up a few pics of me.... I looks purdy scruffy now cuz I don't allow da Mommas to trim my furs wiffout riskin' bloodshed.... see, my eyesight has failed me, too, and I's kinda cranky about thangs dat nevfur used to bother me at all.... but here's  a couple of more recent pics.... 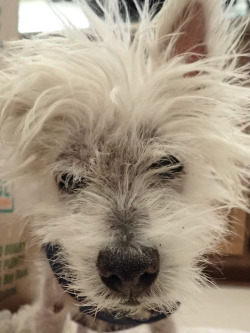 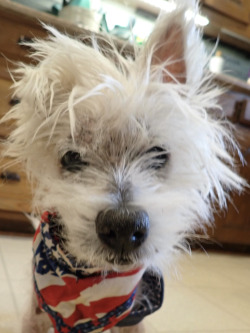 Don't just mosey on, leave your brand by leavin' a comment....

Brinley Westie
Dis here are da blog of me, Brinley, 5 years old, born in Ohio, living in da suburbs of Dallas......dis blog wuz started by my big sisfur, Finley, who is now in da Land of Infinite Bacons and Steaks... we misses ya, Finley........